SpaceX is killing the competition

SpaceX sits in good company. It is a Californian technology start-up that is revolutionising the industry in which it operates. That sentence could easily describe Apple, Google, Amazon, or many other companies. But SpaceX aren’t in the business of building computers, providing search engines, or offering inexpensive consumer goods. They build spaceships. They build rockets. And they build them well. They build them so well that the Germans ask how they can make them so efficiently, and the Chinese want to know how they make them so cheaply.

END_OF_DOCUMENT_TOKEN_TO_BE_REPLACED

If you look at things over a broad span of time, things that are less important fall away. And if you look at things with the broadest possible span of time, with regards to the evolution of life – primitive life started 4 billion years ago – what are the important steps in the evolution of life? Well, obviously there was the advent of single celled life; there was the differentiation between plants and animals, life moving from the oceans onto land, then the development of mammals, and the ignition of the spark of human consciousness. And on that scale, I would argue that on that scale should also fit life becoming multiplanetary.

Life becoming multiplanetary is the natural successor to consciousness, because you need consciousness in order for a species to reach the point at which they are able to develop the technological ability to migrate from one planet to the next. This involves travelling millions of miles through irradiated vacuum, all the while living in an environment they did not evolve to exist in. We are currently living in just such a technological window where this may be possible, and we should exploit that fact. The window will not be open forever. All civilisations rise and fall, and with it, the abilities of that civilisation.

I think that if one can make the argument that something is important enough to fit onto the scale of evolution, then it is important, and maybe worth investing a little of our resources into. This doesn’t need to be a lot; it should definitely be a lot less than what we spend on healthcare, but maybe it should be more than we spend on lipstick.

Why should we fund spaceflight?

I really don’t understand the argument that “we shouldn’t go into space without fixing earth’s problems first.” Why do people think that aerospace engineers have a duty to eradicate poverty, or create world peace?

People have a misconception that money we spend on anything space-related simply burns up. On the contrary: that money goes to pay for engineers and scientists and technicians and goods and all sorts of things, all of which goes back into the economy. Not to mention the added benefits of the research that organizations such as NASA do, which bring about (directly or indirectly) technology that impacts our everyday lives: see NASA-spinoffs.

END_OF_DOCUMENT_TOKEN_TO_BE_REPLACED

Human beings have an innate desire to understand the world, and we have developed two contrasting worldviews as a way of satisfying this desire: religion and science.

END_OF_DOCUMENT_TOKEN_TO_BE_REPLACED

Lowering the cost of space travel

Robert Heinlein once observed that “Once you get to earth orbit, you’re halfway to anywhere in the solar system.” How unfortunate then, that in recent years, many within the space establishment appear to have completely given up on lowering the cost of reaching orbit. From the ever increasing costs of the heavily subsidized EELV program to the astronomical estimates for the Space Launch System, (each claiming they are “cost effective,” by the way) current NASA space transportation systems, with one critical exception, are all headed in the wrong direction.

The exception of course, is the COTS program, which has helped to sponsor the development of two new launch vehicles, the Orbital Sciences Antares, and the SpaceX Falcon.  The former offers a modest return to the historical pricing level of early launch vehicles. The latter however, is utterly revolutionary.

END_OF_DOCUMENT_TOKEN_TO_BE_REPLACED

Time for a second instalment of my ‘weird animal’ series! This time, something a little more cuddly: the pink fairy armadillo. 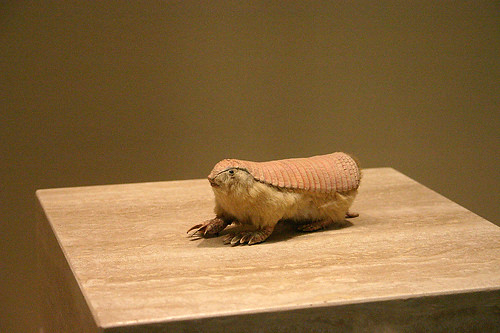 END_OF_DOCUMENT_TOKEN_TO_BE_REPLACED

Humankind has undergone a dramatic shift over the past few centuries. A combination of industrialised farming and modern medicine has allowed us to completely overcome our biology. We exist in record populations, live for longer than ever, and, most crucially are able to survive a wide range of situations that would have previously killed us. We are a social species. We naturally collaborate and help each other, and don’t stand by while others suffer. As a result of this, we no longer live under the law of ‘survival of the fittest’ – we exist as ‘survival of everyone’.

Evolution needs two things in order to work: genetic variation and selective pressure. Genetic variation is inevitable. It will always exist amongst living populations. Even if you had a theoretical population of exact clones, variation would arise over generations due to DNA copying errors, recombination and genetic drift.

END_OF_DOCUMENT_TOKEN_TO_BE_REPLACED

Congratulations to the great Elon Musk, whose Dragon capsule has successfully docked to the Space Station for the second time. SpaceX is moving along in leaps and bounds. Musk has long since stated that his ultimate goal is to successfully land people on the planet Mars. I fully believe he will accomplish that goal. He has even said that he would like to get the cost down to around half a million dollars, which would make moving to Mars a realistic goal for millions of people. I know that if I had the money, and he had the spacecraft, it’d be a tempting offer.

So when humans get to Mars, obviously the first priority would be survival. Mars is a hostile place. It is a freezing -60°C, there is no oxygen, and the atmosphere is only 1% the pressure of Earth’s. Clearly, we will be living indoors. Moving around outside would be possible with the use of pressure suits and oxygen tanks, but the cold would present a real challenge. Most of the energy produced would be used in just keeping us warm.

END_OF_DOCUMENT_TOKEN_TO_BE_REPLACED

What happens after we die?

There are differing definitions of death, but it is clear that if a person is unconscious, their heart has stopped and their brain ceased to function, that person has died. They are beyond resuscitation, and their body, now just an object that resembles a person, meets none of the criteria for life. The body is no longer a series of self-sustaining chemical reactions; through the same miraculous processes that allowed it to live, it will begin an inexorable return to the ecosystem from whence it came.

Following death, pallor mortis is the first stage in the process of post-mortem disembodiment. As the heart has stopped, blood no longer circulates, and the red blood cells (being denser than the plasma) drift downwards, away from the upper surface of the body. This is the cause of the paleness of dead skin, and happens within the first half-hour of death.

END_OF_DOCUMENT_TOKEN_TO_BE_REPLACED

Is flying actually bad for the environment?

I live in a city almost 300 miles away from the city I was born. When I visit my parents, I generally have two options: I can go by train or by plane. Which to pick?

I know that flying is less energy efficient, and it results in more CO2 emissions than catching the train, but importantly: it can be cheaper. I don’t have a lot of money, and small savings can sometimes make a big difference, meaning I am easily swayed by the economic argument. But how strong is the environmental agreement?